GUEST POST: Jennifer Brozek and her Karen Wilson Chronicles 
Jennifer Brozek is an award-winning anthology editor and a talented, prolific speculative fiction writer. Her story, "A Card Given," is part of the anthology I'm editing, WHAT FATES IMPOSE. Jennifer has also very generously offered up a donation of her series of novels, the Karen Wilson Chronicles, as a reward level for the anthology's Kickstarter fund-raising campaign. Jennifer tells the world about her series below, and at the end I'll tell you how you can get it (and my book, too)! 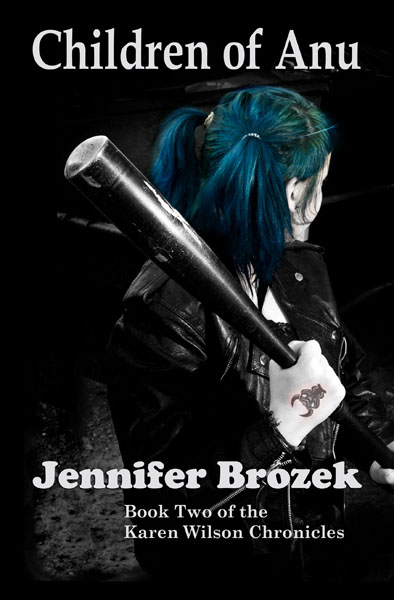 It’s the story of city filled with supernatural, magical factions who have been in a power struggle since the city’s inception. At the time of the first book, all of the factions are at a political deadlock. It’s not open warfare but it’s close. Back alley deals and assassinations are the norm. No one wants open warfare.

In the first book, CALLER UNKNOWN, one faction known as “The Master of the City” chooses a normal mundane woman—Karen Wilson—to be his voice. Karen, as you might imagine, tromps all over the carefully held supernatural Cold War. She doesn’t understand what’s going on or why these people have the rules they do. She forces everything out in the open and almost loses her life in the process.

In the second book, CHILDREN OF ANU, consequences of every action come home to roost and everyone pays the price. I like to think of it as the “Empire Strikes Back” book of the quartet. There are some victories but there are also some major defeats.

These are the two books currently out. The third book, KEYSTONES, will be out in early 2014. This, along with the first two books, is what the backers of WHAT FATES IMPOSE will receive before everyone else. My story in WHAT FATES IMPOSE is called “A Card Given” and it is set between the third and fourth Karen Wilson Chronicles books.

I’ve always had a love of Tarot. My mom taught me to read Tarot and I still have her deck. Throughout the KWC series, John Corso, one of the most neutral of the supernatural powers in Kendrick, is known as the foremost collector of the Todari Tarot Deck—a magical tarot deck where each card imbues the owner with certain powers.

I was so happy to be able to bring my love of Tarot into my series. It was a personal shout out to my Mom for teaching me about them so long ago. I wrote each card as a strange artifact that was almost indestructible and had very particular rules on how they could pass from person to person. In specific, they could only be given or inherited. Never stolen or sold. Should the latter occur, very bad things would happen to the new owner.

It’s why it is so hard for John to give up one of these cards in “A Card Given.” They are his obsession, his love. But he must willingly give up the Todari card to help an ally in need. It’s not the first time he’s done this in the series. But it is the hardest time for him. And, by the end of KEYSTONES, the reader will really understand why it’s needed.
It’s one of the reasons I’m pleased to offer the first two books of the Karen Wilson Chronicles and an ARC of the third. I get to share my love of both the Tarot and the supernatural Pacific Northwest with a couple of readers.

If you pledge to support WHAT FATES IMPOSE at the limited Palmistry and Karen Wilson reward level, you'll get the following:

Let's total that up. This reward level includes WHAT FATES IMPOSE (print and digital), plus five additional books, for a total of six books, plus all those additional goodies, for only $40. The only catch is that this is a limited reward, so only two backers can get it.
Do you want it? Here's where to find it!

I will be tremendously grateful for any help you can give us with the WHAT FATES IMPOSE fund-raiser. There are lots of goodies to be had below the $40 level, including copies of WHAT FATES IMPOSE.

Only thirteen days left until the campaign succeeds or fails on July 14, 2013. It's all or nothing!
(That URL is http://bit.ly/kickfate.)