Don't Call it a Crisis 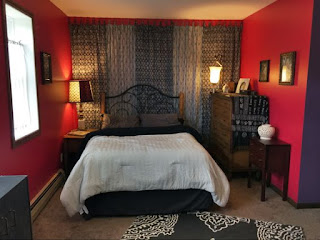 Hey, I'm in the middle-aged years of my life.

And this summer I've been doing a thing.

One might examine the characteristics of this thing I've been doing, and consider the implications of my age being 44, and think this thing might plausibly be called a "midlife crisis." But I don't think that's a very kind or fair label to apply to the thing, so I'm going to call it my Midlife Thing.

It's happening because of good reasons. I've survived to the age of 44 and a half! I've achieved many of the standard life goals for which one can find readily-available advice, such as having the relationships and children that I've wanted, and a series of houses. I've taken some trips that are widely considered to be desirable, to Italy and England. I've learned decent chunks of a couple of different languages. I've even done some things that are a bit less usual, like selling my original paintings at art shows, and publishing some of my short stories and the two original anthologies that I've edited.

My Midlife Thing is not coming from dissatisfaction. It's coming from the feeling that I've crossed off many goals from my original list, and I'm looking at the goals that remain on the list to see if they're still goals that I want to do. And I have this other blank sheet here, and a pen, waiting for me to fill it in with my next set of goals, preferably next-level challenging ones that will feel invigorating.

The way I noticed the beginning of my Midlife Thing - which probably started brewing quite a while before I noticed it - is that I suddenly had this SUPER INTENSE NEED to decorate my bedroom IMMEDIATELY. Summer is a hard time for me to write, because of loud boy-children living life echoingly no farther away than the room adjacent to the room I am in at any given time, so I tend to do more artsy, projecty stuff in the summer. But this need to decorate basically pounced on me, dug in its teeth, and consumed my entire personality for a few weeks there. The photo above is one I took when it was not even as decorated as it is now. YEAH. I've got this "if a goth discovered boho" vibe going on in the room. And I love it.

I love it! But after I did that, I wondered why exactly I needed to do that decorating, that hard, that minute. My conclusion is that I was subconsciously trying to invite in some more creativity so that I could do something bigger than what I had been doing. I was bored and I didn't have any big goals to attack, so I needed to create the kind of bedroom a creative, big-goal-attacking person would have. I just don't usually have to launch my own subconscious at myself in order to figure out things like that.

Once I got my motivations sorted out, I started to spend a lot of time in my magnificent pageant of a bedroom, reading books that seemed relevant and writing many questions and answers. I also started to watch YouTube videos made by some inspiring individuals. I don't even know how I found Marie Forleo's channel, but I watched a lot of her videos, especially her interviews with other people who had written interesting books. I recommend this course of action, because she's interviewed some fascinating people. The first book I read as a direct result of watching her interviews was Big Magic, by Elizabeth Gilbert, which I had picked up and put back down in bookstores I don't know how many times before that. It took seeing Gilbert being delightful in an interview to get me to read it, but at that point I was definitely in the right state of mind to read it. Apparently, despite not being particularly woo-woo oriented, I am in a state of willingness to try out acting as if some woo-woo thinking might work for me even if I don't thoroughly believe in it. Just putting on some woo-woo shoes to walk around in for a while and see if they take me somewhere good.

Which means I also found it useful to read The Fire Starter Sessions, by Danielle LaPorte. It's not ENTIRELY woo-woo, but it's, you know. Pretty spiritual, philosophically. At the same time, it's loaded with personality and good ways to figure oneself out in many areas of life, not just the spiritual side of it.

I CAN ALWAYS TAKE OFF THE WOO-WOO SHOES LATER.

I'm going to end this series of links with one to my new favorite human discovery, Brendon Burchard. He has a long playlist of short videos I've been tearing through. This guy has so much sparkle, it's like watching sentient glitter confetti tell you how to get your shit together. That's the kind of person I want to learn from!

I also have a huge new section of my list of things to read, and I suspect I'll tell you all about that as time goes by, but I've clarified my ambitions a lot already.

What I'm saying is that I've never written an entire novel before, and I still very much want to, and it's time. I don't know what other goals will go on the new list, but this goal is now written at the top. I even know generally which novel I want to start writing (some assembly will be required on the details). So that's my next-level big goal that I'll be working on when the kids are back in school.
Posted by NayadMonroe at 1:53 PM 2 comments: