AUTHOR INTERVIEW: Ferrett Steinmetz Note from Nayad: The series continues. This week and next I'll post interviews of the authors contributing to WHAT FATES IMPOSE: Tales of Divination. KNOW THIS: every one of these authors has a shot at becoming your next favorite author, because they're all that good. I hope you enjoy what they have to say!

As of this morning we have only ten more days to go on the Kickstarter Fundraising Campaign for WHAT FATES IMPOSE. We're up to $3,398 from 137 Beloved Backers, but we still need some help to get to $5,000! 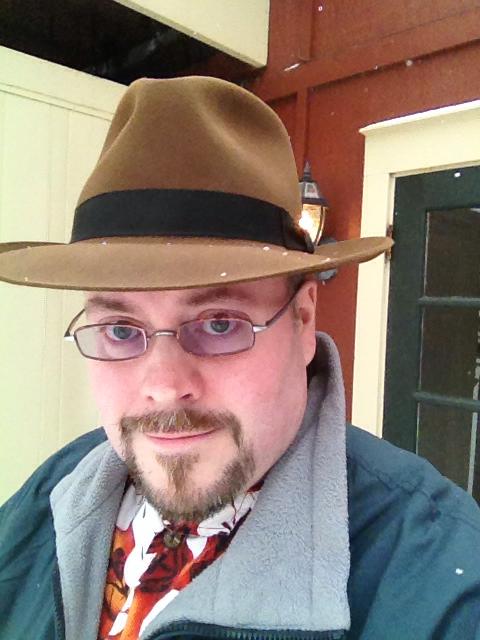 Ferrett Steinmetz is a Nebula Award-nominated author. He has been mentioned by Neil Gaiman in at least one public speech as an example to show that creative writing can, in fact, be taught. His story for WHAT FATES IMPOSE, "Black Swan Oracle," gives us a chilling look at how predictable people and their choices can be, and the outcome of making such predictions.

Now here's Ferrett! Who can explain to you how vacuum cleaners lead to Deep Thoughts about the divination prospects of social media, and also give you solid, get-to-work writing advice. *a thousand muppets flail at once*

This sounds weird, but I was developing a Facebook application and I needed to see how it looked to a "non-admin" user. So I created a throwaway account under the name of my Roomba cleaner, which we were very excited about at the time. And my wife was amused, as were two of my friends, and they "friended" my Roomba, Opposite Cat.

The frightening thing was how well Facebook extrapolated. Given three people, it analyzed the web of contacts and started to pick - correctly - people who had been in contact with my vaccuum cleaner. With a very small chunk of data, Facebook's engines had more information than I'd thought possible. And I started to think: what would happen after we had generations of that kind of data? How would this work with ten billion lives, all chronicled in public space, when people could start to determine not just who you were friends with, but who you were most like... and, from there, accurately pick your most likely life's path?

And what psychological damage would those facts do to the poor bitch who sifted through that data?
From thence came "Black Swan Oracle." A tale of Facebook predictions. A tale that is a little frightening in what it says about humanity.

My advice is always the same:

a) Shoot high. When you're writing, remember that you need to shoot high. To get published in a professional magazine, you need to not just be as good as the greats - you need to be better, because a Neil Gaiman or a Joe Hill or a Cat Valente or a Kij Johnson on the cover will sell copies, whereas your name will bring nothing. So you have to outdo them. Just for the one story, mind you. But that can be done, because...

c) Revise. Most people can't write a killer story in one shot. Most people, particularly when beginning, need to go back and really break down the process something fierce. Some, like Stephen King, are lucky enough to be able to knock it out in two drafts. I need five. Geoff Ryman, a brilliant writer, sometimes needs twenty. Don't settle for less than perfection, and don't be afraid to take a break.

All my stories can be found at http://www.theferrett.com/ferrettworks/stories/.

Only ten days left until the WHAT FATES IMPOSE Fundraising Campaign succeeds or fails on July 14, 2013. It's all or nothing!