Author Interview: David Boop Note from Nayad: The series continues. This week I'll post interviews with authors contributing to my speculative fiction anthology, WHAT FATES IMPOSE: Tales of Divination. If you want to read twisty tales about struggles with destiny, this anthology is for you. I hope you enjoy these author interviews!

As of this afternoon we have only three more days to go on the Kickstarter Fundraising Campaign for WHAT FATES IMPOSE. We're up to $4,663 from 192 Beloved Backers. That's an amazing 93%, but we still need $337 to get to $5,000. The Countdown Is Happening. We're SO CLOSE. :)

If you'd like to help out, you can easily tell friends about the book by clicking here. If you contribute any amount from $1 on up at our Kickstarter page, you will get our first bonus art download in addition to whatever rewards you choose, and we're only 8 backers away from making that TWO bonus art downloads. Will you help us? Because we would love to create this book and pay our authors pro rates for their work. 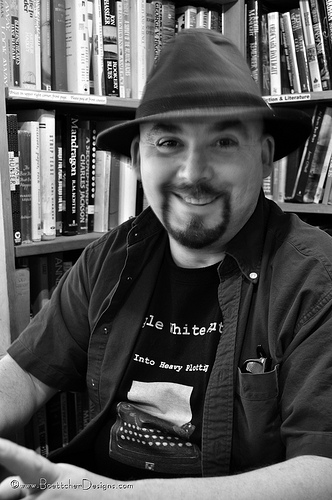 David Boop is a novelist, short story writer , and super-friendly guy. I first met him after he was on a panel at NorWesCon. I don't remember the topic of the panel, but I remember the title of his book, which was such a good title that I needed to compliment him on it: She Murdered Me with Science. He's is also in a table of contents with me in Space Grunts: Full-Throttle Space Tales #3, edited by Dayton Ward, as well as having stories in a bunch of other tables of contents! He offers flash fiction critiques for one of the reward levels in our fundraising campaign.
David's story for WHAT FATES IMPOSE: Tales of Divination is called "Dipping into the Pocket of Destiny." It shows how trying to get an edge over the competition depends on both the quality of your information and the context around it, so you need to keep an eye on cause and effect.
Here's David with some context for you! *as the strand of fate that brought you here is woven into place, Events of Significance begin to play out*

The idea of glimpsing into the future is so personal. It can enlighten or corrupt. It’s been explored in fiction since the beginning of time; the Bible, Gilgamesh, Oedipus Rex, we’ve always been fascinated with trying to beat fate at its own game.
How did you get started on developing the idea for your story in What Fates Impose?
I wanted a break from the Old West stories I’d been writing lately, and decided to right something very modern and urban. I wanted to experiment with voice, as well. I came across an article about how few pickpockets were left in NYC, and knew I had my morsel. I was pressed for time, so I wanted to keep the plot simple; the last pickpocket in New York picks the wrong pocket, but it seemed so much like other stories I’d read, or seen. That meant going deeper. I looked into several different medium con games, and came across a reference to mediums working bingo parlors, charging people to tell them which bingo cards would be lucky or not. I had the crux of my story and just built from there.
Do you have any advice for aspiring writers?
Stop aspiring and write? Heh, heh. Here’s the thing I can add that maybe no one else has. I knew I’d reached a plateau in my writing after my third publication, mostly because I couldn’t get a fourth. It was time to push myself. I went back to school, a community college, and relearned the craft of writing as an adult. I was still working from a teenagers knowledge of English, which had served me well, but I wanted to do better. Know when you’ve hit your ceiling and find a way to push through; college, workshops, online classes. There are many options. Avail yourself of them.
Which subjects and themes do you write about often, and why?
I have two “go to” themes: redemption and “the fish out of water.” I’ll give you the second one first. The FOOW story places the everyman/everywoman in a situation they’re woefully unprepared for. It’s a place we’ve all been and appeals to our sense of the familiar in fiction. In short fiction, unless you’re returning to the same world, the reader is always the FOOW. Why not make use of it? The redemption trope works well in noir and westerns. We love to see heroes fall, as much as we love seeing them pick themselves up again. The trick in both cases is to write something unpredictable, add a fresh voice or spin on the theme. It’s okay if a story looks as if it’s going to be cliché if A. it’s well written and B. it isn’t by the end.
What's your favorite story of all the stories you've written, and why?
A parent does not pick a favorite child, does one? Well, okay. The child that doesn’t put you into a nursing home will always be the favorite. ;-> “Bleeding the Bank Dry” from the anthology “Six Guns Straight From Hell” has to be near, or at, the top.
Where can people find other published work of yours? I have an author page on Amazon, a Facebook fan page (Facebook.com/dboop.updates,) a website (davidboop.com) or, if you’re in Denver, The Broadway Book Mall (Ron and Nina Else support all the local authors.)

Only three days left until the WHAT FATES IMPOSE Fundraising Campaign succeeds or fails on July 14, 2013. It's all or nothing!

Disclosure of Material Connection: I'll receive a tiny royalty payment for each copy of Space Grunts: Full-Throttle Space Tales #3 that someone buys, and I sincerely hope to eventually get royalties from WHAT FATES IMPOSE: Tales of Divination, if it becomes profitable!
Posted by NayadMonroe at 9:42 AM