AUTHOR INTERVIEW: Tim Waggoner 
Note from Nayad: The series continues. This week I'll post interviews with authors contributing to my speculative fiction anthology, WHAT FATES IMPOSE: Tales of Divination. If you want to read weird stories about fortune-telling, this is the book for you. I hope you enjoy these author interviews!

As of this morning we have only six more days to go on the Kickstarter Fundraising Campaign for WHAT FATES IMPOSE. We're up to $3,879 from 160 Beloved Backers. That's almost 78%, but we still need some help to get to $5,000. The Clock of Let's Get Serious is now ticking.

If you'd like to help out, you can easily tell friends about the book by clicking here. If you contribute any amount from $1 on up at our Kickstarter page, you will get a bonus art download in addition to whatever rewards you choose! Will you help us? Because we would love to create this book and pay our authors pro rates for their work. 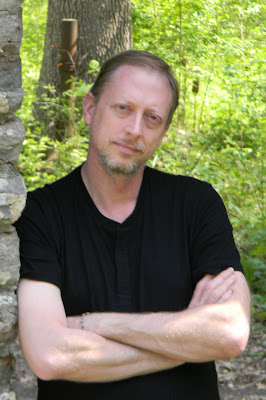 Tim Waggoner is a popular, award-winning horror writer who has published over thirty novels and three short story collections, and also a creative writing teacher at Sinclair Community College and in Seton Hill University’s Master of Fine Arts in Writing Popular Fiction program. His story in WHAT FATES IMPOSE, "The Goggen," is a creepy modern fairy tale about the darkness lurking behind waterfalls and inside human minds.

Here's Tim with great stuff about his writing themes, writing advice for you, and how the I Ching gave him the right wisdom to get him started as a professional writer. *out of nowhere, an orchestra starts playing dramatic classical music*

As a story element, it’s interesting to see how foreknowledge – especially imperfect or unclear foreknowledge – impacts character and story. And it can allow for a lot of fun twist endings. In real life, the concept, whether viewed mystically or scientifically, is intriguing because of how it might affect us as individuals or as a society. The world of Minority Report may not be as far away as we think!

I’ve never had a professional reading, but when I was the editor of my undergraduate literary magazine in college, my associate editor introduced me to the I Ching. He had me concentrate on a question and toss some Chinese coins on a table. My question was, “Will I become a professional writer?” My friend examined the coin patterns and then looked up the corresponding answer in the book. It was “Perseverance furthers.” More advice than prediction, perhaps, and generic advice at that, but it was an excellent reply to my question. There are so many things that writers can’t control: how much talent they were born with, the subjective opinions of agents and editors, the state of the publishing industry . . . But the one thing a writer can do (even if it’s not always easy) is persevere.

If you are against the idea of getting your fortune told, what are your reasons for that?

The only thing I’m against is spending money for it! But to be honest, I may be a little afraid of what I might learn from a reading. What if someone really could predict my future? At best it would be a spoiler, and at worst it could be a serious emotional blow. I don’t talk about this much, but during my childhood and young adulthood, I had a number of what were arguably paranormal experiences, all minor for the most part, but since then I’ve avoided seeking out experiences like that. Normal life is hard enough without adding anything otherworldly to it!

When I first got my iPhone, I started writing down weird and interesting things that I see, including strange words or my bizarre misreadings of normal words. Whenever I need an idea for a story, I scroll through the idea file on my phone and see if anything strikes a creative spark. I recorded the word goggen in my note file, but I have no memory of where or how it came to me. It was probably a word I misread or misheard. When it came time to develop an idea for WHAT FATES IMPOSE, I went through my file and was struck by the word. A goggen sounded like some sort of dark fairy tale creature, like a troll or ogre. After that, my imagination was off and running, and eventually I finished a story I quite cleverly titled “The Goggen.”

Tons! (Which is why I teach creative writing.) But I’ll limit myself to three important tips.

Much of my fiction is based on the existentialist idea that reality is intrinsically without meaning, and it’s up to us to make our own meaning. I also deal with the inevitability of entropy – in multiple senses of the word – and how, if we’re powerless to stop it, we might be able to slow it down a bit, or at least come to terms with our (ultimately hopeless) situation. The theme of duality shows up in my work a lot, too. Duality of character and personality, duality embodied in the world around us, etc. These themes have arisen naturally as I’ve written over the years. They’re simply ideas that interest me as a person, so they naturally find a way into my fiction.

What's your favorite story of all the stories you've written, and why?

“Mr. Punch,” which was my first professional sale. It appeared in the anthology Young Blood in 1994. As I was writing this bizarre, surreal story unlike anything I’d ever attempted before, and as I drew close to the ending, I was suddenly aware of how much better it was than anything I’d ever written before, and I froze and stopped writing. Eventually, I forced myself to return to the story and finish it. Later, during a Q&A session at a writers’ workshop at the Context science fiction convention, I told this story and discovered that both Gary A. Braunbeck and Charles Coleman Finlay (who were on the panel with me) had exactly the same experience when writing their first professionally published stories. I’ve always wondered if this experience is a common one among writers.

I like and dislike the same thing: coming up with an idea that I hope no one else in the anthology has already thought of. Whenever I do a story for a theme anthology – and I’ve written a lot of them – I spend a great deal of time considering and discarding ideas, searching for one that I’m relatively confident no one else has come up with. The process is maddening in many ways, but it’s also challenging and, when I come up with a story that works, ultimately rewarding. It’s like playing a game of chess with a dozen ghosts at once.

My third short story collection, Bone Whispers, was recently released from Post Mortem Press. It’s available in both print and ebook editions. My tie-in novel Supernatural: Carved in Flesh, based on the television series, is also still available. You can find out more about me and my work than you ever wanted to know at my website: www.timwaggoner.com.

What else would you like to tell people about any subject?

Without mucus, your stomach would digest itself.

Only six days left until the WHAT FATES IMPOSE Fundraising Campaign succeeds or fails on July 14, 2013. It's all or nothing!