A Good Weekend for Art in Madison, WI 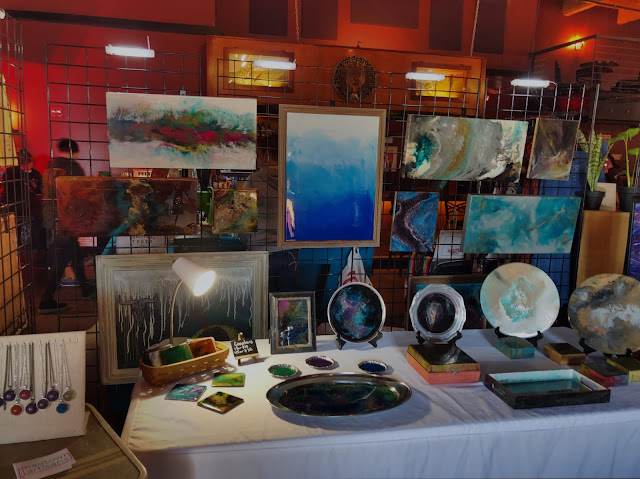 (Artist Erica Engebreth gave me permission to post this photo of her awesome booth.
Check out her art at Little Bit Lacey)

This post is late in the day because I spent the afternoon looking at art in a couple of different places. The photo above is from an art & craft show in the High Noon Saloon in Madison, WI. It was a free event with at least a couple dozen booths featuring art, jewelry, clothing, and other things by local makers in a wide variety of styles. The DJ was absolutely on point with fun-but-chill music. I did not get anything at this show, but that's because I knew I was about to go to a bigger show, the Winter Art Fair Off the Square in the Monona Terrace. If the two events hadn't been competing, I know I would have talked myself into buying a couple of things at the smaller show. It's very sad to want all of the things but only be able to get some of the things.

The larger show did charge a small fee to get in (regular price $5 per person 13 and older, but you could get a discount with a coupon through Facebook). It also had 134 booths, plus a concession stand and live music being played on a grand piano (although I was a bigger fan of what the DJ played at the smaller show). The selection and the prices were both much larger here, but there were reasonably-priced items to be had. After looking around for a while, I bought a small painting of an Earth Dragon from Charlotte Fung Miller, who was very friendly and enthusiastic about explaining the meaning behind her paintings; once she saw that my son and I were interested in the dragon ones, she showed us around to see every dragon painting she had. The one I got was on metal instead of canvas, and I'm looking forward to finding a prominent place to display it in my house.

I also collected cards from several of the artists' booths, especially ones where my son was interested in the items they were selling and they had websites I could visit later, because CHRISTMAS IS COMING. This year I'm trying to focus more on quality than quantity in gift-giving. I want to be attentive enough to give a few things that people really want, and sneaky enough to make some of them surprises. That's something I feel good about being able to do. Even when I was a child under the age of twelve, my mom would comment that I was good at choosing gifts that other people would like. It's a matter of being observant and comprehending what it is that they like about the things that they like.

Okay, I had better post this before it gets even later. I'll be back tomorrow with another post!
Posted by NayadMonroe at 6:00 PM