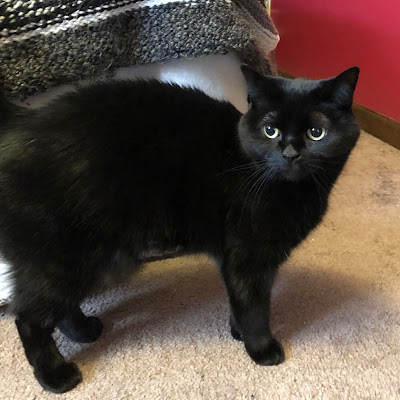 (Matilda gets to be first because she is the tiniest)

I live with three female cats, and this post will be entirely about them. If you don't like cats, you're excused for today.

Likes: Tuna (don't worry - this is a rare treat), dry food, catnip, my bed, rolling around in sunshine patches, purring louder than cats twice her size

Dislikes: Canned cat food, being picked up, being run off from comfy spots by Annabelle

Quirks: She likes to get up to somewhere really high - just out of my reach is ideal - and act like she is desperate for me to pet her. Purring, mewing, reaching her paw out toward me, leaning her head way down so that I can just barely touch it... but not actually getting down so that I can pet her.

Mouse-hunting skills: Ineffective. A couple of times a year, a mouse will get the idea to move into my house. Tilly will participate in chasing a mouse around, but she hangs back and doesn't try to actually catch it.

Additional info: Tilly is mostly black, but she has two splotches of white on her belly.

I've had this tiny little sweetie, and her litter-mate Tabitha, since October of 2010, when they were six weeks old. They came from a farm owned by the relative of a friend of a friend, and the people there were eager to get the kittens out to new homes (I think it's better to wait a couple weeks longer, but the kittens were going fast and I didn't want to test the farmer's patience). The momma cat was a tortoiseshell. 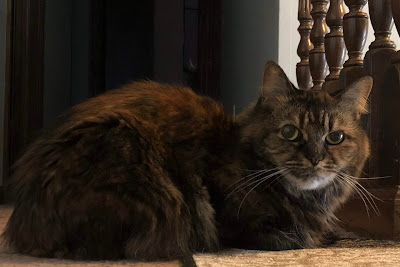 Nicknames: Tabby (which refers to her name more than her coloration, because she's really a torbie, a mix of tortoiseshell and tabby), Fluff-puff, Bunny

Likes: Canned cat food, catnip, tuna, sitting on a blanket on a person's lap, curling up in a tiny ball in the middle of a giant foam pouf chair, clawing the carpet on the stairs, drinking water from the sink faucet

Dislikes: Being picked up, vomiting on easy-to-clean surfaces (she coughs up the occasional hairball due to having long fur, and when choosing a barfing zone, only the carpet will do)

Quirks: Every time I take a shower, within one minute of stepping out afterward I can expect Tabby to scratch at the bathroom door to be let in. I think it's that she likes the warm, humid air. Sometimes she jumps into the still-wet bathtub.

Mouse-hunting skills: Pretty decent. She does a lot of herding, and sometimes actually touches the mouse.

Additional info: I suspect that Tabby and Tilly are half-sisters, since litters of kittens can have multiple dads. Here's the first picture I saw of them, with their other siblings: 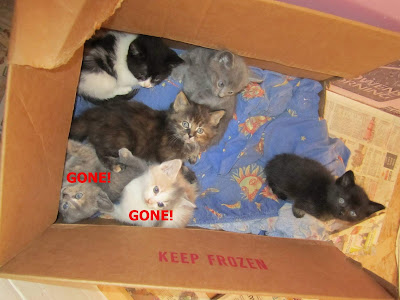 No offense to my darlings, but the first kitten that caught my eye was the black-and-white guy in the upper left corner. Someone else had already inquired about him. Just from looking, my feeling is that he and Tilly might have had the same dad, while the others had a different dad. But it doesn't matter! And I would have been thrilled with any of these kittens. Or all of them, if I'm being completely honest. 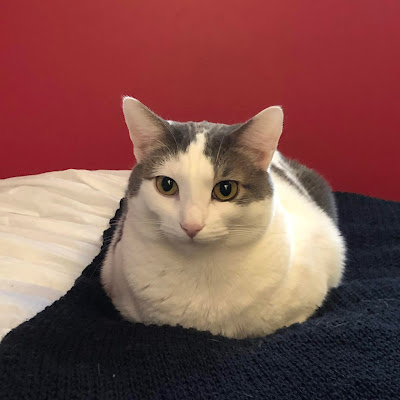 Likes: All kinds of cat food, tuna, catnip, chasing after aluminum foil balls (sometimes even bringing them back!), making chittering noises while watching birds from the window, carrying around a soft mouse toy like it's her teddy bear, being picked up and carried around like a human baby

Dislikes: Sharing spaces with Tilly (but she's okay with being next to Tabby, who does not appreciate the honor and is more comfortable with snuggling Tilly. So it goes)

Quirks: When she has a soft mouse toy to carry around, her favorite thing is to drop it into the water bowl, bat it around in there until it's good and soaked, and then carry the dripping-wet mouse everywhere she goes. She also likes to occasionally leave the wet mouse in pathways where humans tend to walk, so they can step on it.

Mouse-hunting skills: Outstanding. She has a 100% success rate, but doesn't try to eat them. If I take the mouse away while it's still alive (I have a system that doesn't involve touching the mouse with my hands), she gets mad and pouts for a while. The last two times she caught one, it was when I wasn't home, so she left a dead mouse where I could see it. This is preferable to other things I can imagine, like discovering that she's left one under my bed or something. She's my mouse-hunting star!

Additional info: I got Annabelle from the Humane Society shelter when she was 8 weeks old. They had named her "Anna Bell." I thought about changing it to something else, but "Annabelle" fit in with the other cats' names, so I went with that. I wanted to bring home both Annabelle and her brother, an all-gray kitten they were calling Monty, but someone else had asked for him already. I think it's probably better that I only got the one kitten that time, because Monty was very high-energy, and I didn't realize at the time that Annabelle was going to be equally high-energy. They were in separate cages, I guess because they weren't spayed or neutered yet? Or because they were both hyper. Monty was wide awake at the time, but Annabelle was napping when I showed up, so she was very snuggly and purry when I held her. She still snuggles, but she's also a feisty one a lot of the time. She's absolutely fearless and dominant when only the people and cats she knows are around. When anyone else visits, she hides. Visitors are much more likely to see the more sedate Tabby and Tilly, who will both come out and beg for scritches as if they're being neglected. They are, of course, petted and scritched for long stretches of time, every single day.

And here's a picture of Annabelle on the first day I met her! 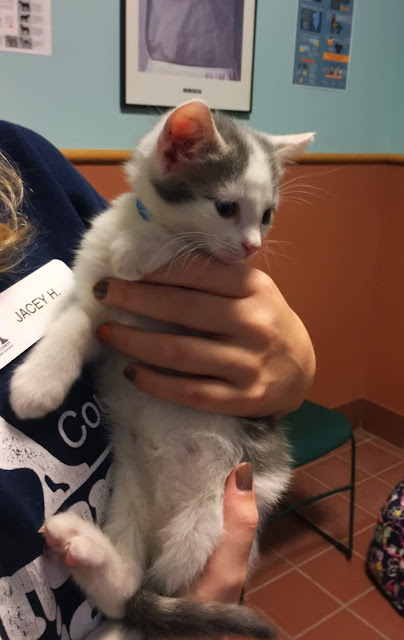